Apple and Carrot Cake
Should you have watched the outstanding Trooping of the Colour this year – June 9th 2018. In addition to the exceptional display of marching by the Coldstream Guards, you may have noticed the starring equine role played by the charger ‘Royal Blue’ of the Royal Military Academy Sandhurst. This was the mount of Colonel Launders of the Coldstream Guards who as Officer in Command of the Parade was to issue the instructions to provide the accurately timed continuity of the Parade.
Royal Blue is to be commended for his steadiness and equine authority in support of the Colonel throughout the parade. 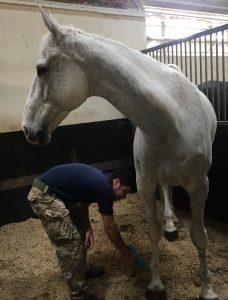 Attached is a photograph of Corporal of Horse (Blues and Royals) Daniel Evans scraping out the parade ground grit from the hooves of that starring horse later that afternoon. Should the horse have been better rewarded? Of course he should, and after the clean down he was the recipient of a delicious apple and carrot cake for his contribution.
Why should I write all this you may ask? It’s easy, the cake was made by my granddaughter Jessica and Daniel’s young son Xander then presented to the horse who accepted it willingly in preference to the usual oats and straw.

Royal Blue was to follow this up as star attraction when, as mount of Adjutant Major Dominic Alkin, Grenadier Guards on the 10th August, 2018.  He was to ride up the steps of the grand entrance of the Royal Academy, Sandhurst as part of the Passing Out parade of some 200 new to be promoted 2nd Lieutenants into postings in the British Army.

Attached is the horse and rider along with trainer Corporal of Horse Daniel Evans.

Jessica isn’t one of the characters of this village, but she’s visited and walked round it many times as you would imagine. She reminds me that years ago she always enjoyed bringing the carrots for the horses the paddock at the Low End when we called to get eggs from Eddie the Egg Man.
This article when published on the Facebook page ‘Characters of Methley’  attracted 575 hits in 36 hours.